By assigning officers, generally, to the same geographic district each shift, officers become familiar with the unique problems and quality of life concerns brought to the department’s attention.

The Northern District includes all properties along and to the north of Wisconsin Avenue.  This district includes the commercial corridors of Wisconsin Avenue, Northland Avenue, and Richmond Street.  Traffic enforcement and crash investigation are priorities for this district with Interstate Highway 41, State Highways 96 and 47, as well as portions of three Outagamie County highways passing through the district.  The Northern District is home to some of the Fox Valley’s largest employers as well as the City’s largest park, Memorial Park.

The Scheels USA Youth Sports Complex is located in this district and this facility hosts local, regional, and national soccer, baseball, and softball competitions and tournaments.  Fox Valley Lutheran High School is also on the far north side of this district. 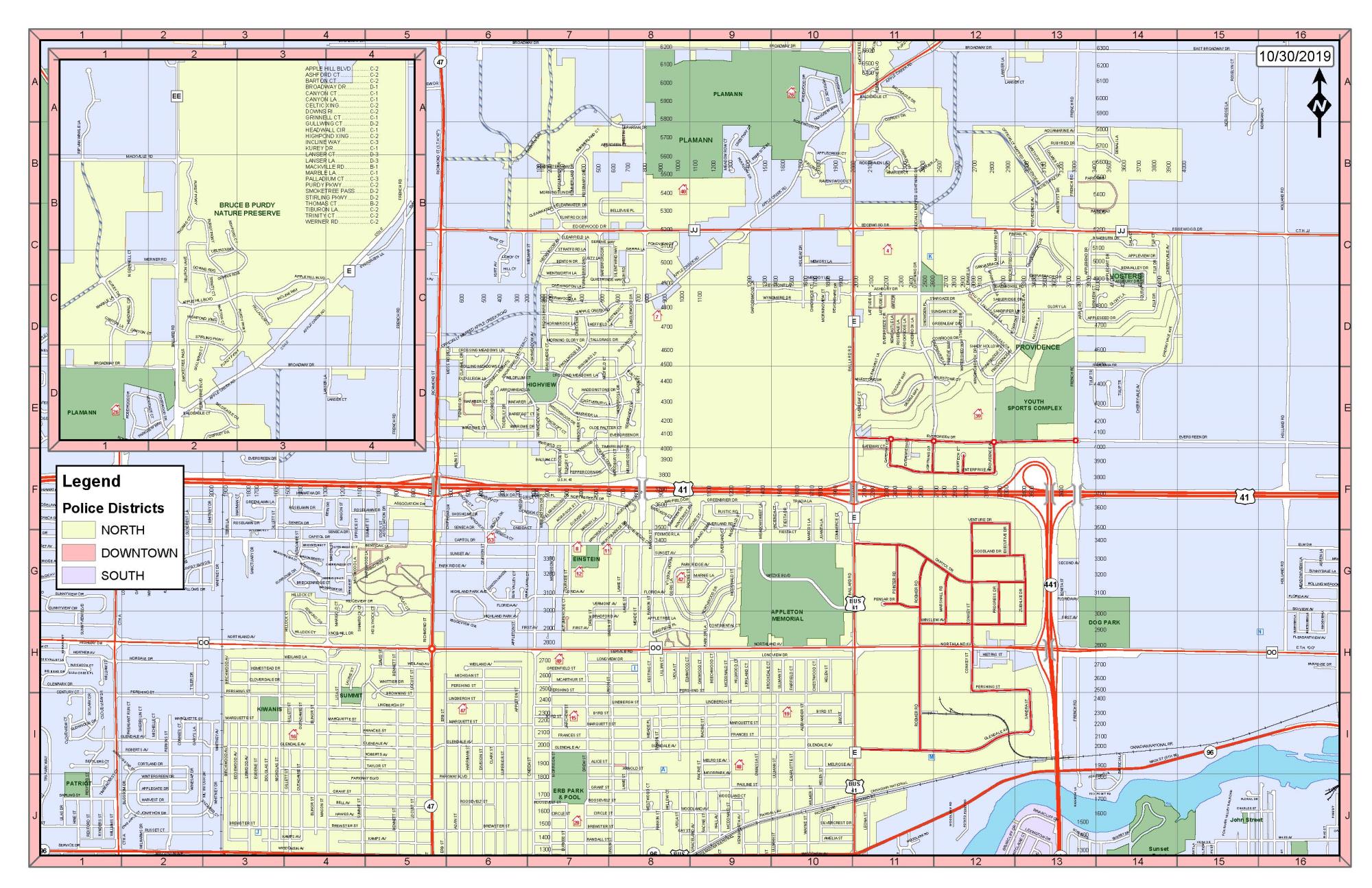 The Downtown District includes all city property in between Wisconsin Avenue and the Fox River.  The Downtown District is the APD’s most diverse service area and includes some of Appleton’s main attractions.  On College Avenue, The Fox Cities Performing Arts Center brings nationally-touring performing arts, concerts, and local events to the Downtown District.  Lawrence University’s beautiful campus overlooks the Fox River on the east end of this patrol district.  Two of the Appleton Area School District’s high schools are located in this area as is Xavier High School.

Each August, the Mile of Music Festival takes place in downtown Appleton, bringing national recording artists and thousands of music fans to the area.  College Avenue is home to the nation’s oldest Flag Day Parade in June as well as a large family Christmas Parade in late November.  The district includes some of Appleton’s most scenic parks as well.

The APD dedicates a significant amount of our resources to make Downtown Appleton a safe destination for those visiting and staying in our entertainment district along College Avenue.  On the weekends, downtown Appleton becomes a major entertainment destination.  In addition to bustling nightlife destinations, a year-round Farmer’s Market takes place each Saturday morning…right on College Avenue June-October and inside the City Center mall space the rest of the year.   District leaders and officers regularly meeting with downtown business owners and advocacy groups to respond to and proactively plan for year-round events and festivities.

The Southern District is largely residential, but it also includes growing commercial and industrial areas.  The APD’s area of responsibility along State Highway 441 is one of the district’s major responsibilities in inclement weather.  Commercial development along the highway corridor has brought traffic control challenges which we address in conjunction with Appleton’s Department of Public Works.

The riverfront area of the Fox River continues to develop quickly with a mix of retail and residential properties.  The district is home to Appleton’s Telulah Park as well as one of the city’s two public swimming pools, Meade Pool.  Reid Golf Course also adds to the recreational opportunities on Appleton’s south side. 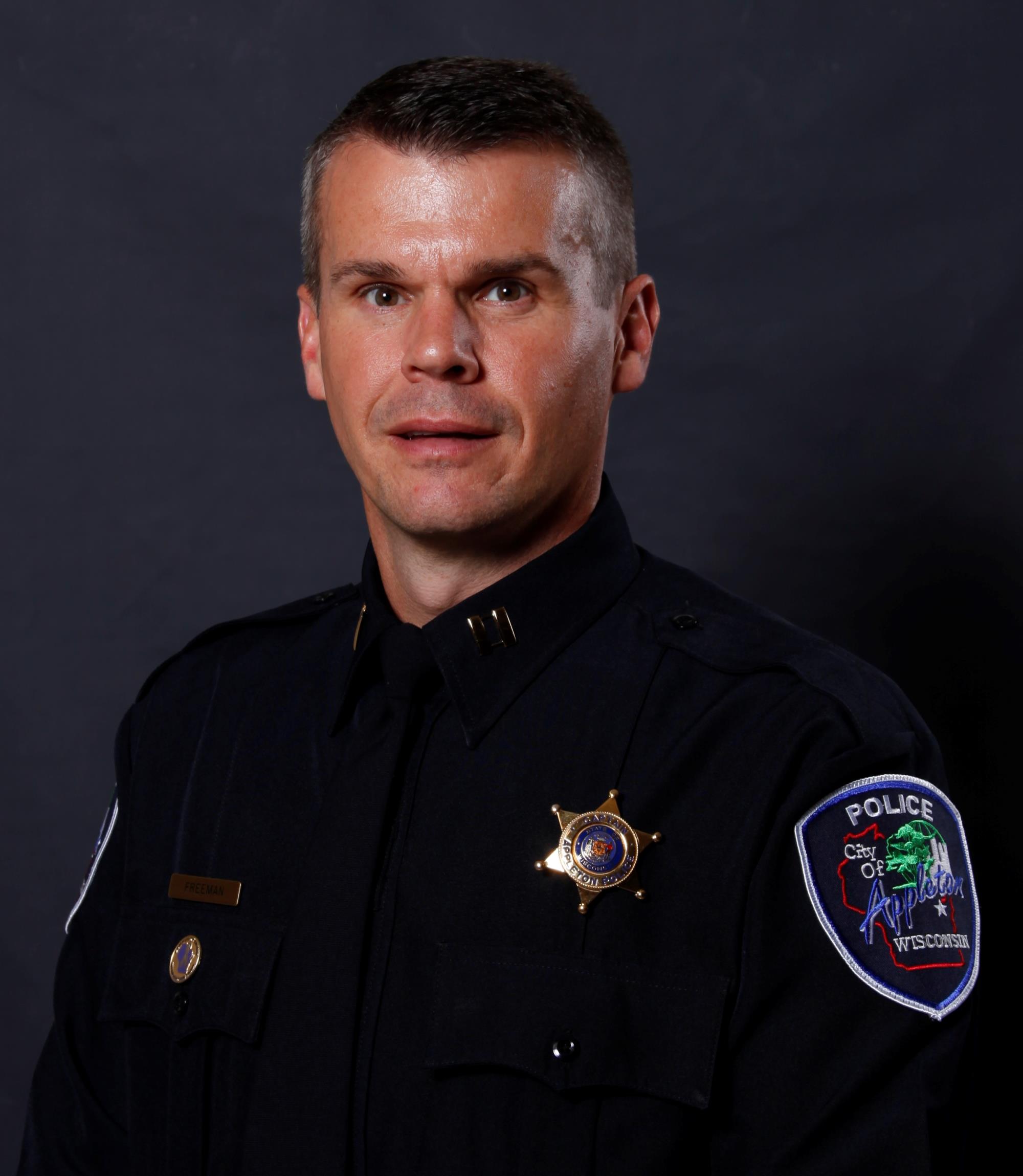